Daegu during the Early Years of Western Music in Korea

The piano is often regarded as a symbol of Western music. In Korea, the piano made its first appearance in March 1900 by Richard Henry Sidebotham (Korean name: Sa Bo-dam 史保淡).

He was a British missionary posted at the Daegu branch of the Foreign Missions Board of the Northern Presbyterian Church of the United States of America. Hoping to bring a piano from the United States for his wife, he transported one from Busan on a boat through the Nakdonggang River on March 26, 1900, which docked at Samunjin Port in Hwawon, Daegu (present-day Hwawon-eup, Dalseong-gun).

From there, the piano took another three days to finally arrive at Sidebotham’s house in Jongno, Daegu. In a letter to his parents in America, he made a detailed account of the transportation process. His granddaughter Dr. Sara Curtice Greenfield donated his keepsakes, including the letter, to the Busan Modern History Museum in 2009, making known to the world the story of the first piano of Korea. The piano is currently housed at the Medical Missions Museum of the Dongsan Medical Center in Daegu. 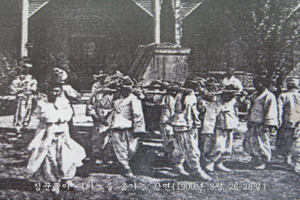 “100 Piano Concert” in Commemoration of Korea’s First Piano
The “100 Piano Concert” is an annual event held since 2012 in commemoration of Korea’s first piano introduced through Samunjin Port in Hwawon-eup, Dalseong-gun, Daegu. Grossing huge revenues each year, Daegu signed in May 2017 a memorandum of understanding with “Piano City Milano,” which is a piano music festival sponsored by Milano City.

It was during the early 1900s that Western music was introduced to Daegu in a practical sense. Piano lessons were offered at Sinmyeong Girls’ School in 1907, and a brass band was formed at Gyesan Cathedral in 1912. The first hymn choir performance in Daegu was held at Namseong Church under the baton of Park Tae-jun in 1916. In 1917, a choir was formed at Jeil Church, in which Park Tae-won, Park Tae-jun, and Hyun Je-myung were actively involved.

Park Tae-jun wrote Korea’s first children’s song, Autumn Night, in 1920. Besides him, many acclaimed musicians were based in Daegu, such as Hyun Je-myung, composer of “Thinking of My Hometown” and “Chunhyangjeon,” the first baritone Kim Mun-bo, and Kwon Tae-ho, a tenor who performed Daegu’s first solo vocal concert. These masters, who were all active in Daegu, left a significant legacy on the history of modern Korean music.

Korea’s first classical music hall, Nokhyang, opened in Daegu in 1946. The late Yi Chang-su, a would-be singer himself, established Nokhyang with some 500 SP records and a single phonograph. The music hall was frequented by many artists who came to Daegu to take refuge during the Korean War, operating as a breeding ground for numerous works of art.

Today, Yi’s son runs the music hall. Described in a foreign news report from the era as “a place where one can hear Bach even amidst war-torn rubble,” Daegu has long been recognized as a music-loving city.